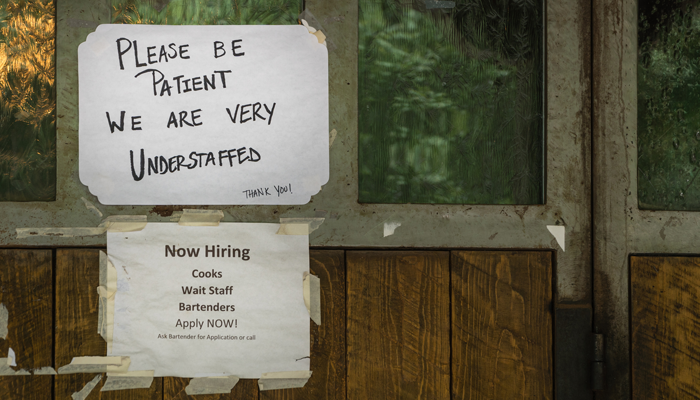 Canada’s job market ended 2021 on a high note. According to Statistics Canada, Part-time employment declined by 68,000, but that was offset by a strong upswing in full-time employment of 123,000 for a total net of 55,000. These numbers were driven by gains in the good-producing sector with Ontario and Saskatchewan seeing the most growth.

However, these numbers came from before the surge in the newest COVID-19 variant. Omicron in Canada is causing a severe decline in employment to start 2022. Nonetheless, there is cause for optimism.

A lot of jobs were lost—more than expected. Statistics Canada reported that employment fell by 200,000 in January, with 117,000 part-time jobs lost and 83,000 full-time. Total hours worked fell by over 2 per cent after being at pre-pandemic levels at the end of 2021.

Most of these jobs were lost in Ontario and Quebec, where lockdown measures were the strictest in the country. Industries such as accommodation and food services, information, culture and recreation, and retail trade saw the largest declines.

Finally, 10 per cent of employees were absent from work due to illness or disability—a record high.

However, recent history shows the Canadian job market can rebound quickly. A similar surge in job losses last year in January was followed by 272,500 new jobs in February. Then in the spring, after losing nearly another 200,000, June bounced back with a gain of 214,000.

As frustrating as these yo-yoing numbers may be, it is encouraging to see that Canada’s job market is resilient. Also, while the record number of workers out due to illness is also daunting, it’s also a sign that employers tried to keep employees on payroll instead of laying them off. It’s also encouraging that workers are taking the necessary time off while to sick to avoid spread, hopefully leading to a shorter wave.

Average hourly wages grew by $0.72 in January 2022, which was down 2.7 per cent from the end of 2021, but still a 2.4 per cent year-over-year increase. So, for those looking for a new job, the good news is that wages are still trending upwards.

Finally, experts say that the worst of this wave is over, and provinces are rolling back mandates. We have seen a lot of ups and downs in the last two years, but this is certainly cause for cautious optimism for job seekers as things settle into a new normal.

Visit https://tritoncanada.ca/online-police-checks to get yours today and be job-market ready.